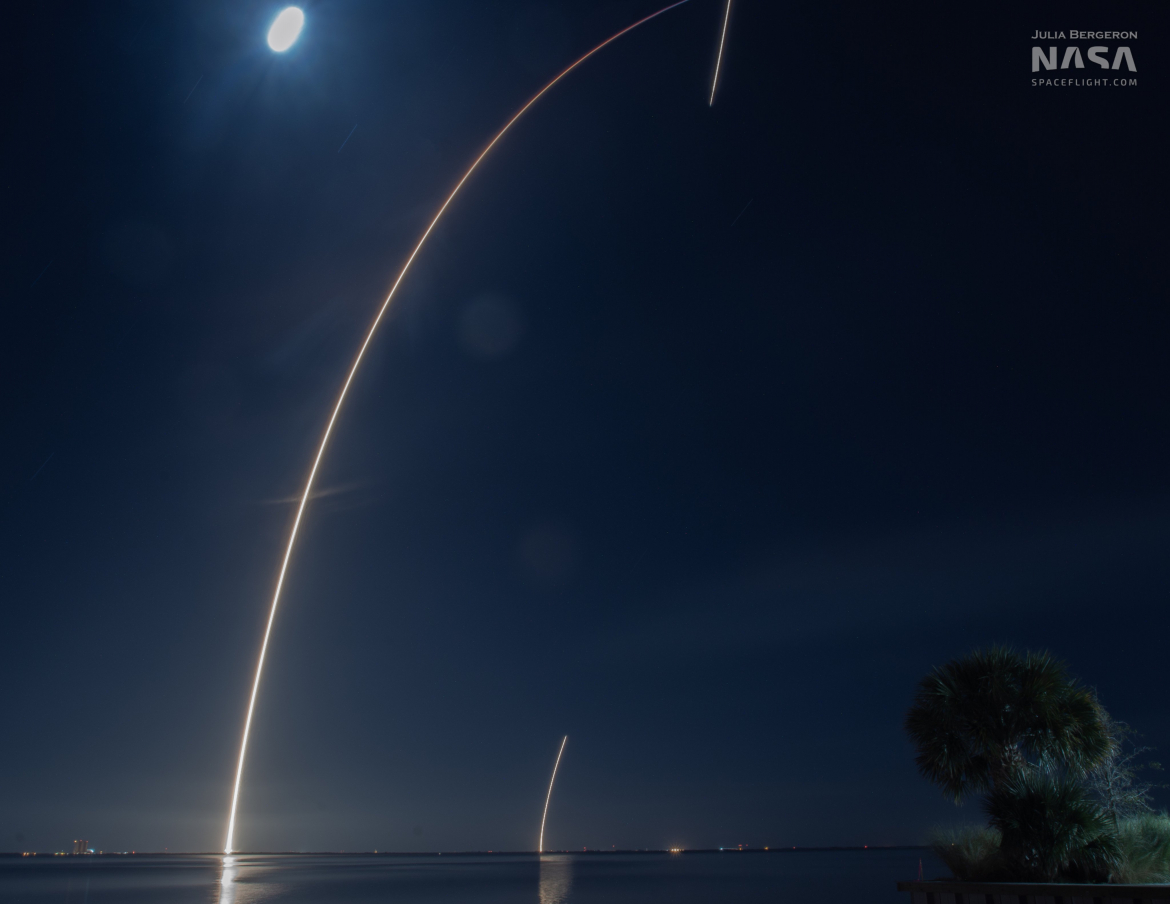 The 45th Weather Squadron of Space Launch Delta 45 predicted a less than 10% chance of violating weather constraints on Jan. 9. The cumulous cloud rule was the primary weather concern but did not affect the launch.

OneWeb is a global communications company with the second-largest satellite constellation currently in orbit. Once complete, the initial constellation will consist of 648 satellites, 600 of which will be active satellites, with the remaining 48 serving as on-orbit spares. The satellites are small, massing ~148kg each, and are powered by two solar panels. The satellites also utilize an electric propulsion engine, which is used to boost the satellites up to their final operating orbit at an altitude of 1,200 km and maintain proper positioning within the constellation.

The first six OneWeb satellites were launched into orbit in February 2019 aboard a Soyuz ST-B/Fregat-M rocket from the Soyuz Launch Complex at the Guiana Space Center in French Guiana. Two more launches would follow in February and March 2020 aboard Soyuz 2.1b/Fregat-M rockets from the Baikonur Cosmodrome in Kazakhstan before the company filed for bankruptcy near the end of March 2020.

In early July 2020, a consortium led by Bharti Global and the Government of the United Kingdom would win an auction to purchase the OneWeb. Launches resumed in December 2020, with 36 satellites being launched onboard a Soyuz 2.1b/Fregat-M rocket from the Vostochny Cosmodrome in eastern Russia.

Our teams have been working through the end of year season ahead of the first of several milestones this year: #OneWebLaunch16 with @SpaceX.

This mission’s patch reflects our countdown to global connectivity later this year.

Follow us for updates on launch date and time 🚀 pic.twitter.com/S6zFlOLZAw

2021 would see eight more OneWeb missions atop Soyuz 2.1b/Fregat rockets, with five of the missions, carrying 36 satellites, launching from the Vostochny Cosmodrome. The other three missions launched from the Baikonur Cosmodrome, carrying 34 satellites each.

On Feb. 10, 2022, the final OneWeb launch aboard a Soyuz vehicle would launch from the Guiana Space Center. The following launches, which were set complete the initial constellation of satellites, would be canceled as a result of the Russian invasion of Ukraine. OneWeb would later sign launch agreements with the Indian Space Research Organization (ISRO) and SpaceX to conduct the remaining launches.

Under the agreement, India is contracted to launch two OneWeb missions, one of which was completed in October 2022 when a GSLV MK III lofted 36 satellites into orbit. SpaceX is contracted to launch three missions, the first of which was completed on Thursday, Dec. 8, 2022, when a Falcon 9 launched 40 satellites into orbit from Florida. Falcon 9’s increased payload capacity allows for a higher number of satellites to be launched at once.

As mentioned, OneWeb Flight #16 is the second of three missions that SpaceX will launch for OneWeb. The mission carried 40 satellites and marked the first mission of 2023 for OneWeb, with two more missions scheduled for launch this year (one launch from SpaceX and one launch from ISRO).

At T-38 minutes, the go/no-go poll for propellant loading was conducted. With everything nominal at the time the poll was conducted, fueling began at T-35 minutes. Liquid kerosene, commonly referred to as RP-1, and liquid oxygen (LOX) were then loaded onto the first and second stages.

RP-1 loading on the second stage was completed at T-20 minutes, after which the transporter/erector (T/E) purged its vent lines. At T-16 minutes, stage two LOX loading began and continued until around T-2 minutes.

At T-4 minutes and 30 seconds, the T/E clamp arms opened from around the second stage. Once fully open, the T/E itself moved to its pre-launch position by tilting a few degrees away from the rocket.

Fueling of Falcon 9 concluded at around T-2 minutes, and the vehicle began to pressurize its tanks up to flight pressure. At around T-45 seconds, the launch director gave the final go/no go for launch.

At T-3 seconds, Falcon 9’s engine controller gave the command to ignite the nine Merlin 1D engines. Once all nine engines were confirmed to be at full power and operating nominally, the four launch clamps around the base of the vehicle released, allowing Falcon 9 to lift off of the pad and begin its ascent to orbit.

At liftoff, the T/E performsed its throwback maneuver, during which the structure quickly leans back away from the vehicle. This is done to protect the various propellant lines and mechanical systems on the T/E from being blasted by the rocket’s exhaust as it lifts off.

Shortly after liftoff, Falcon 9 began to pitch downrange. Since the mission was launched into a polar orbit from Florida, Falcon 9 needed to complete a “dogleg” maneuver after first flying south-southeast in order to avoid flying over land during the launch. 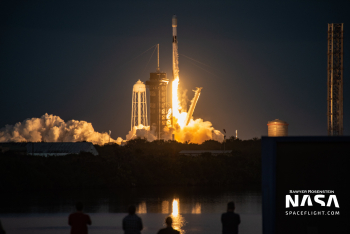 Two minutes and 18 seconds after liftoff, the nine Merlin 1D engines on the first stage shut down, and the first and second stages separated with the help of four pneumatic pushers located at the top of the first stage. A few seconds later, the second stage ignited its single Merlin Vacuum (MVac) engine, called Second Engine Start 1 (SES-1), to continue lofting the 40 OneWeb satellites into orbit.

During SES-1, the first stage fired its cold gas thrusters to quickly flip around and ignite three engines. This burn, called the boostback burn, lasted approximately 48 seconds and propeled the first stage back toward Landing Zone 1 (LZ-1) at CCSFS.

Approximately three minutes and 34 seconds after launch, the two fairing halves separated and expose the OneWeb satellites to the vacuum of space. The two fairing halves later re-entered the atmosphere and deployed a parachute to softly splash down in the Atlantic ocean ~608 km downrange. Once in the water, they will be recovered by SpaceX’s recovery ship Doug.

Six minutes and 20 seconds after liftoff, the first stage reignited three engines for the entry burn, which lasted around 16 seconds. The entry burn helps to slow down and protect the booster as it reenters Earth’s atmosphere.

After the entry burn, the booster continued falling toward LZ-1 for less than a minute, using its four hypersonic grid fins to steer itself toward the landing zone. Once the booster reached a certain altitude, the center engine ignited for the approximately 30-second-long landing burn, allowing the booster to softly touch down on LZ-1. The booster flying this mission was B1076, flying for the second time. This booster is new to the fleet of Falcon boosters, having conducted its first flight during the CRS-26 mission in November 2022. 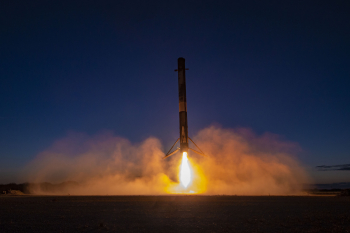 Just over eight and a half minutes after liftoff, the second stage entered its initial parking orbit, and the MVac engine shut down, known as Second Engine Cutoff 1 (SECO-1). Stage 2 then coasted for 46 minutes and 45 seconds before briefly reigniting its engine to place the satellites into their intended deployment orbit.

Once in the deployment orbit, the second stage coasted for another three and a half minutes before beginning the satellite deployment sequence. The 40 OneWeb satellites were deployed two at a time over a ~36-minute period.

This mission marked SpaceX’s second flight of 2023. The company aims to conduct up to 100 orbital launches in 2023, and if successful, the company will crush its record-setting 2022, during which SpaceX conducted 61 orbital launches.

After the OneWeb Flight #16 launch, SpaceX is expected to launch the Starlink 2-4 mission launch from Vandenberg Space Force Base in California. After this, SpaceX plans to launch the USSF-67 mission atop a Falcon Heavy from LC-39A no earlier than Jan. 13.

(Lead photo: Falcon 9 lifts off and returns to LZ-1 over the course of the OneWeb Flight #16 mission. Credit: Julia Bergeron for NSF)