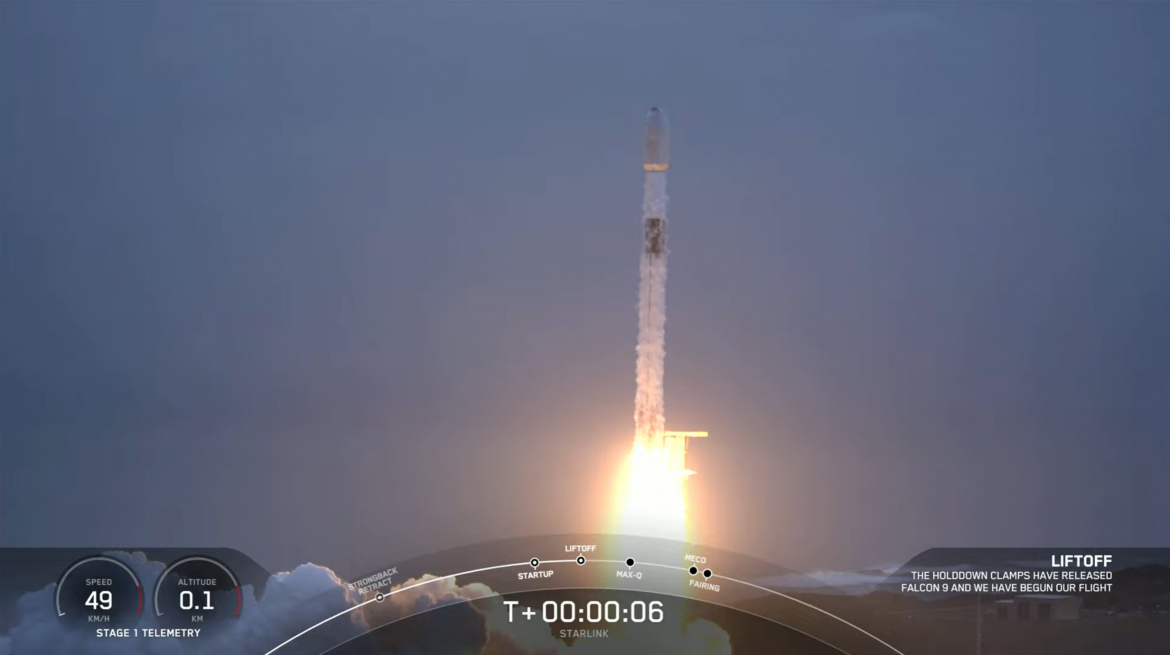 SpaceX carried out the first Starlink launch of 2023 with a mission placed 51 satellites into orbit to resume deployment of the constellation’s second shell. The Group 2-4 mission, which was delayed from November, lifted off at 7:43 AM PST Thursday (15:43 UTC) aboard a Falcon 9 rocket from Space Launch Complex 4E at Vandenberg Space Force Base in California.

Previous launch opportunities were forgone due to weather and then “to take a closer look at data from second stage.”

The launch continued the rapid deployment of Starlink, SpaceX’s satellite broadband constellation. Operating in low Earth orbit, thousands of Starlink satellites will be used to provide high-speed, low-latency internet service to customers around the world — particularly in areas where traditional terrestrial internet services are less available.

Once fully deployed, the first-generation Starlink constellation is expected to consist of 4,408 satellites across five shells in various orbits. Each shell consists of several orbital planes, with each plane containing multiple satellites. Shells one and four contain the majority of the spacecraft, each featuring 72 planes with 22 satellites per plane. The other shells operate in higher-inclination orbits, providing coverage of higher latitudes on Earth’s surface.

SpaceX launched a pair of testbed satellites for what would become Starlink in February 2018, followed by a full group of sixty prototype satellites in June 2019. These missions paved the way for the first operational Starlink launch, which took place on Nov. 11 of that same year. Since then, over 3,500 of these satellites have reached orbit — a milestone that was reached last October with the Group 4-36 launch.

Despite its numbering, Starlink Group 2-4 is only the second launch to target the constellation’s second shell: the Group 2-2 and 2-3 missions have yet to launch. Group 2-1 was deployed in September 2021, with most Starlink launches since then contributing to shell four.

Shell two will eventually contain 720 satellites spread across 36 planes — with 20 spacecraft per plane. Operating in a circular 570-kilometer orbit and inclined at 70 degrees, they sit in between the lower-inclination, higher-density shells one and four, and the near-polar shells three and five (not the same orbit as Starlink Group 5, part of the second generation constellation).

A significant factor in SpaceX’s ability to deploy Starlink so rapidly has been its ability to rely on its own rockets to carry the satellites into orbit. The Falcon 9 rocket can loft large groups of Starlink satellites — with previous launches having carried as many as 60 — while still allowing for recovery of the rocket’s first stage and payload fairing. Starlink launches have almost exclusively used flight-proven boosters, with only one previous mission having flown atop a new first stage.

The Group 2-4 launch was previously slated for mid-November, a few days after the third anniversary of Starlink’s first operational launch. At the time, it was due to have used two-year-old flight-proven booster B1061-11, making its eleventh flight. With delays to the Starlink mission, B1061 was reassigned to deploy Israel’s EROS-C3 satellite, which it did successfully in SpaceX’s — and the world’s — final launch of 2022.

In its place, the Starlink 2-4 launch saw a new booster, B1075-1, make its debut. It is only the second booster to fly a Starlink mission as its maiden flight — preceded by B1073 last May on the Group 4-15 flight — as new boosters are generally reserved for customer launches.

B1075 is the seventh new booster to fly in the last year, with B1071 being introduced on a National Reconnaissance Office mission — NROL-87 — last February, B1073 flying in May, B1077 in October with the Crew-5 Dragon mission, and B1076 being used for the CRS-26 Cargo Dragon mission in November. The other three boosters — B1064, B1065, and B1066 — made their debuts together as a Falcon Heavy, used to carry out the USSF-44 mission at the start of November. With the exception of B1066, the Falcon Heavy’s center core which was expended as part of its mission, all of these new boosters remain in service.

Boosters can be converted between Falcon 9 first stages and Falcon Heavy side boosters. B1075 was originally built as a side booster for NASA’s Psyche mission when it was targeting a 2022 launch date. With that mission being delayed, B1075 has been fitted with an interstage and added to the pool of Falcon 9 boosters.

Falcon 9 launches from the west coast lift off from Space Launch Complex 4E (SLC-4E) at Vandenberg Space Force Base. SLC-4E was built as part of the US Navy’s Point Arguello launch site, becoming part of the US Air Force’s Vandenberg Air Force Base when the two facilities merged in July 1964. The first launch from the pad, then designated Point Arguello Launch Complex 2-4 (PALC-2-4), occurred in August of the same year.

The pad was originally home to Atlas-Agena rockets before transitioning to the larger Titan rocket in support of National Reconnaissance Office (NRO) projects. It hosted Titan III(23)D, III(34)D, and Titan IV launches. In October 2005, the final Titan rocket, a Titan IV(404)B lifted off from the pad. SpaceX began work to convert the derelict launch complex into the current Falcon 9 launch site in 2011, with the first Falcon launch from Vandenberg taking place in September 2013.

A sister pad, SLC-4W, was built alongside SLC-4E. It also saw service with the Atlas-Agena and later Titan — with the smaller Titan IIIB and II(23)G versions using it. The last launch from SLC-4W took place in October 2003, and the complex has now been turned into SpaceX’s Landing Zone 4 (LZ-4). LZ-4 is used to recover the first stages of Falcon 9 rockets when flying return-to-launch-site missions from SLC-4E, although Wednesday’s mission will instead be heading for a landing downrange aboard a drone ship. 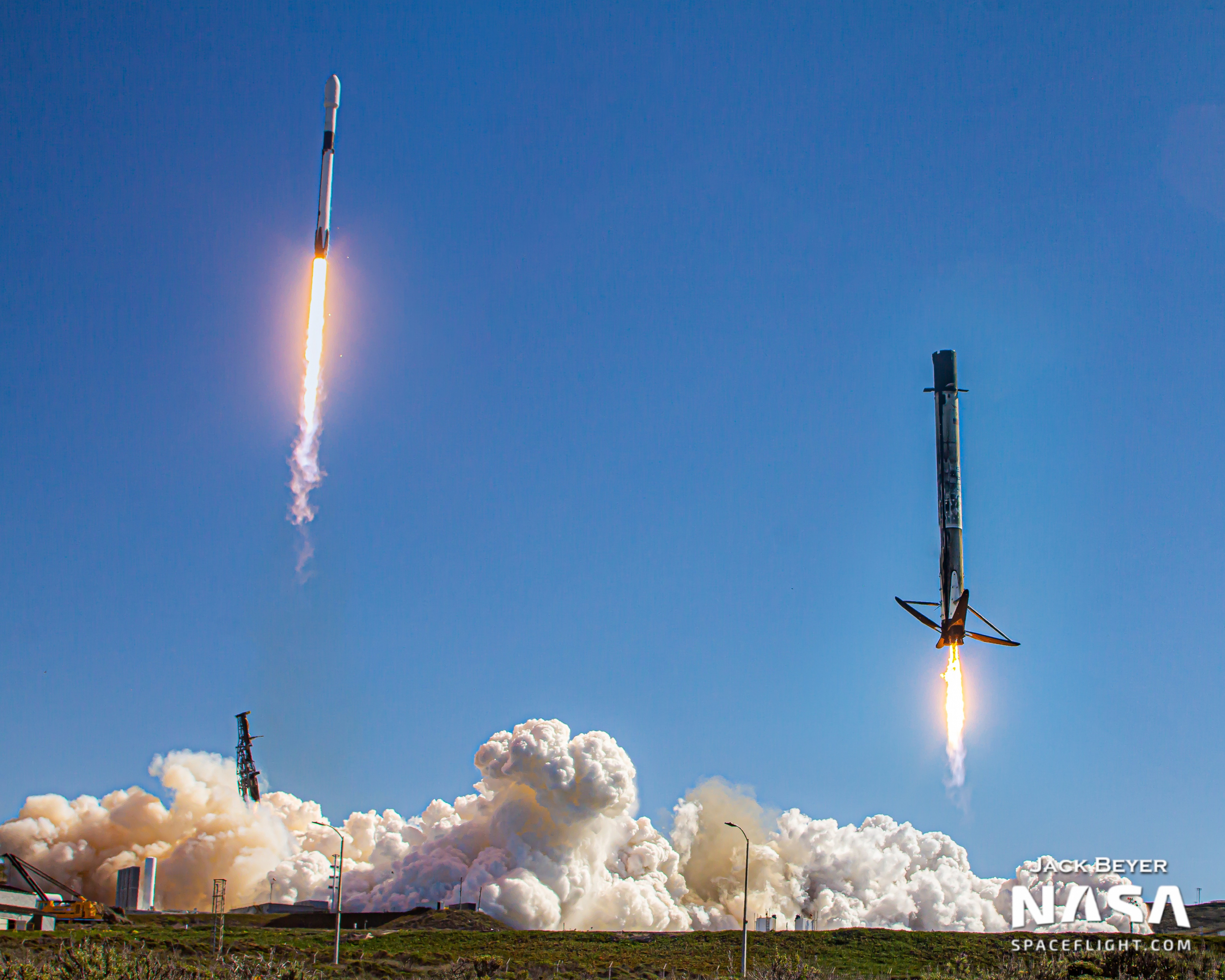 Falcon 9 is assembled horizontally in a hangar close to the launch pad. Once integrated, the rocket is rolled out to the launch pad and raised vertical using the strongback. This structure also helps to support the rocket while it is vertical at the pad and provides umbilical connections to the upper stage and payload fairing.

The Falcon is a two-stage rocket. B1075 serves as the first stage, with its nine Merlin-1D engines providing the thrust that will carry the rocket away from the launch pad, through the dense lower regions of Earth’s atmosphere, and toward space. While the first stage is designed to be recovered, the second stage is not, so a new second stage is built for each mission and expended during the course of the flight.

The Starlink satellites sit atop the second stage, encapsulated within the rocket’s payload fairing. The fairing helps to protect the satellites during their climb through the atmosphere and is jettisoned shortly after the vehicle reaches space.

The mission began with the liftoff of the Falcon 9 from SLC-4E. Booster B1075’s nine engines begin their ignition sequence at the T-3 second mark in the countdown, allowing time for them to reach full thrust and be checked out before committing to launch.

After lifting off at T0, Falcon climbed away from Vandenberg. The rocket pitched downrange as it maneuvered onto its planned trajectory, heading southeast along the coast. About 72 seconds into the flight, the mission passed through max-Q, the point of maximum dynamic pressure, with the vehicle reaching supersonic speed around the same time. 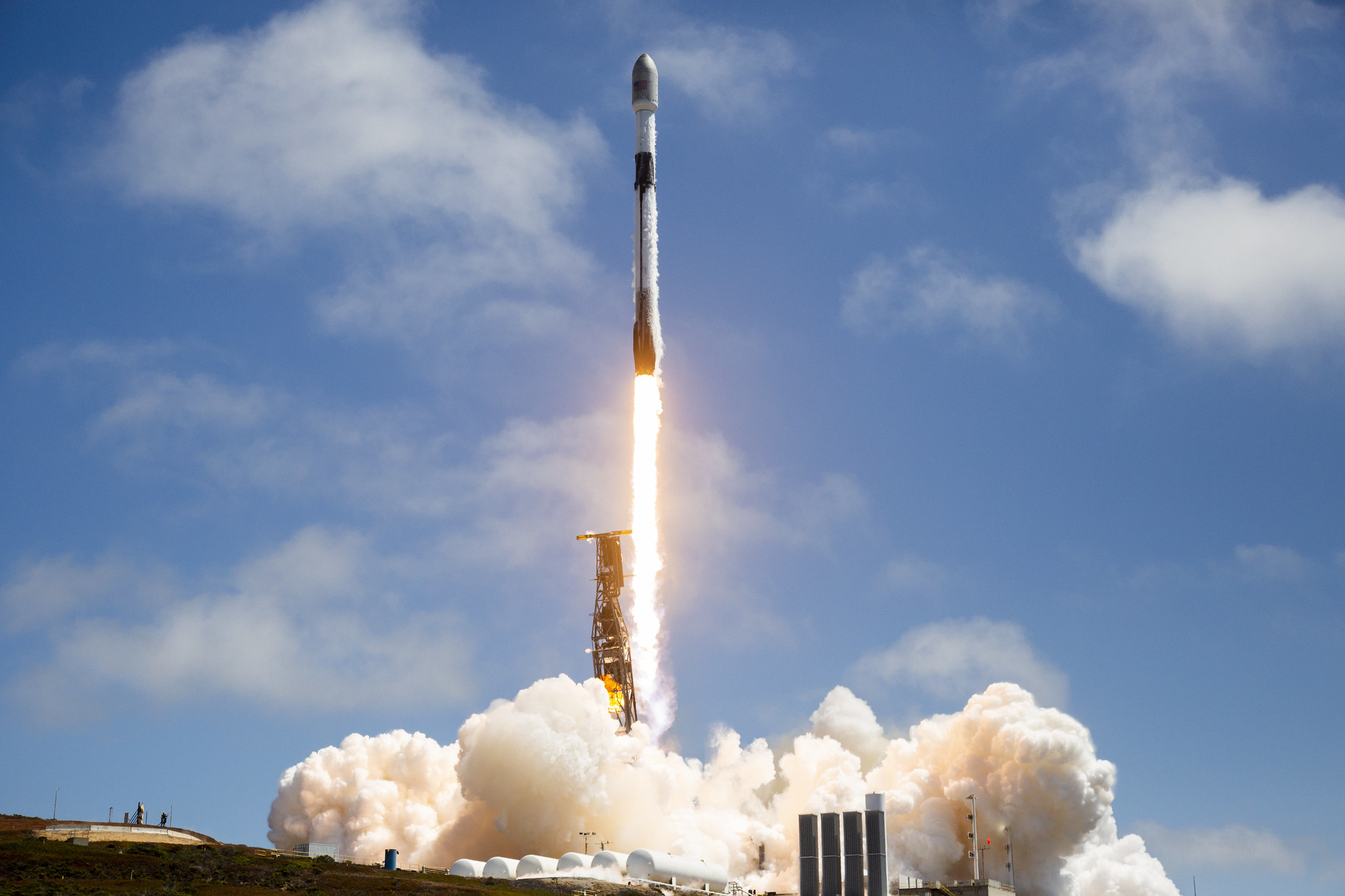 Booster B1075 powered Falcon 9 for the first two minutes and 26 seconds of the mission, with the end of its burn designated main engine cutoff (MECO). About four seconds after MECO, the stages separated, with the second stage taking over to carry the Starlink satellites into orbit. Ignition of the second stage’s single Merlin Vacuum engine — a version of the Merlin-1D optimized for peak efficiency outside of the atmosphere — came about six seconds after staging.

While the second stage continues toward orbit with the Starlink satellites, B1075 coasted to its apogee — the highest point of its trajectory — before beginning its descent. The stage landed aboard SpaceX’s autonomous spaceport drone ship (ASDS) Of Course I Still Love You (OCISLY), stationed downrange to receive it. Using the drone ship to recover the booster allows SpaceX to put a heavier payload on Falcon 9 than it would be able to carry on a return-to-launch-site mission, while still allowing the booster to be recovered.

The booster made two additional burns using a subset of its engines as it descended toward its landing on OCISLY. The first of these was the entry burn, which serves to slow the rocket down and protect it as it reenters the atmosphere. The entry burn began at about six minutes, 43 seconds mission elapsed time, lasting around 20 seconds.

Ignition for the landing burn began at the eight-minute, 19-second mark, with this firing guiding B1075-1 to a soft touchdown on the deck of OCISLY about 24 seconds later. Following a successful landing, the drone ship will be towed back to port to ready the booster for its next mission.

While the first stage was making its return to Earth, the second stage carried on with the primary mission. Early in its burn — at about two minutes, 41 seconds mission elapsed time — the payload fairing separated, splitting into two halves that fall away from the vehicle and exposing the Starlink satellites to space for the first time. Like the first stage, Falcon’s fairing can be recovered and reused, with the fairing halves using small thrusters to orient themselves for re-entry, and parachutes to make a controlled descent into the Pacific Ocean where they will be picked up by recovery ship NRC Quest. 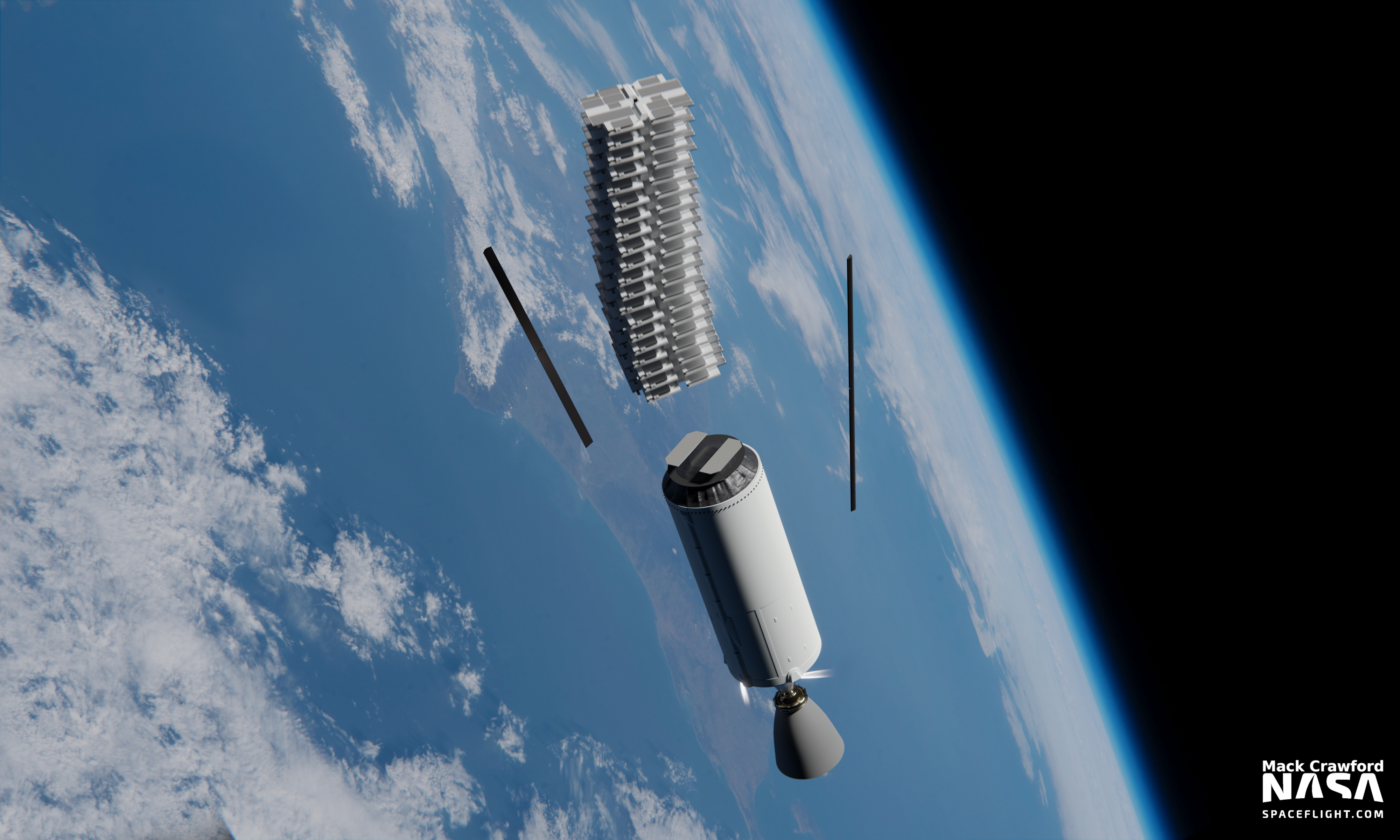 Second stage engine cutoff (SECO-1) was at around eight minutes, 39 seconds into the mission, concluding a six-minute, three-second burn. Spacecraft separation was a little over 29 minutes after launch, with all 51 satellites released simultaneously. The satellites are deployed into a low orbit so any that are faulty will quickly re-enter the atmosphere. Working satellites will be raised into a more stable orbit for initial checkout before being positioned in their operational orbits.

After deploying the satellites, the second stage will perform a disposal burn to deorbit itself, ensuring a safe reentry over the North Pacific Ocean.

This launch was the fifth of the year for SpaceX and the fourth for Falcon 9.

(Lead image: A previous Starlink mission on the pad before launch. Credit: SpaceX)