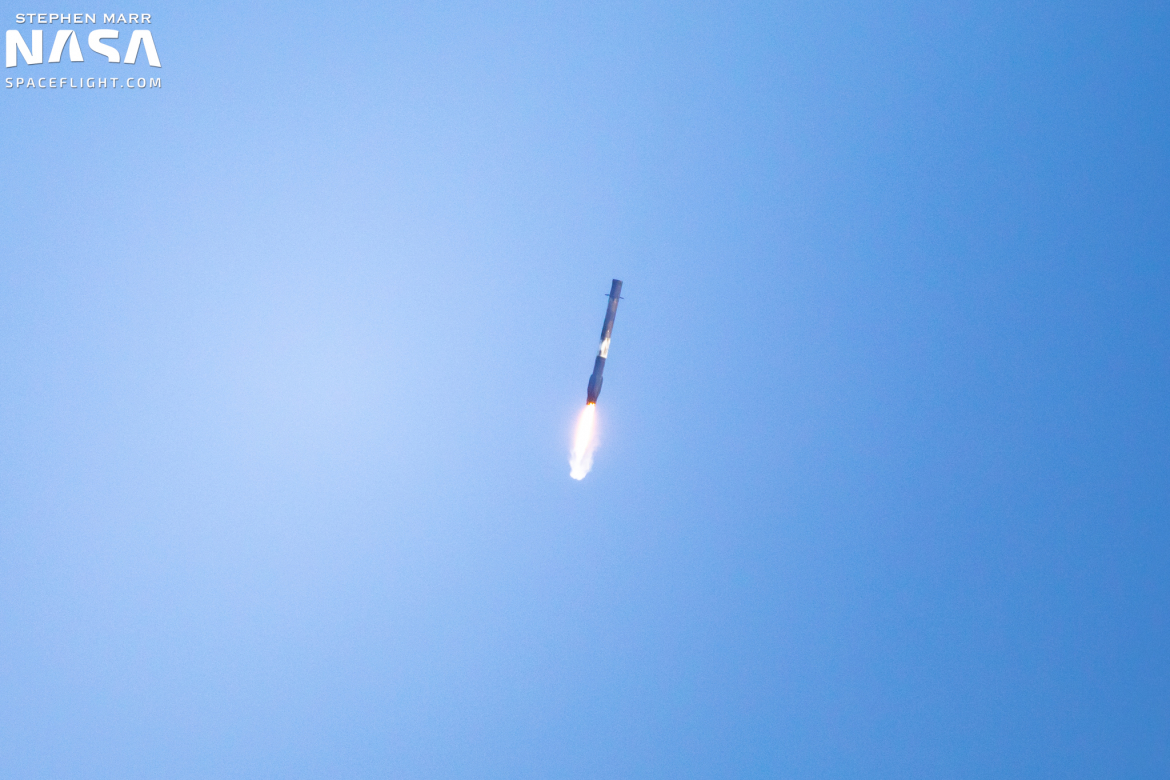 SpaceX began another busy year with the launch of the Transporter-6 rideshare mission from Space Launch Complex 40 (SLC-40) at Cape Canaveral Space Force Station (CCSFS). The mission lifted off at 9:56 AM EST (14:56 UTC) on Tuesday, Jan. 3, 2023. Falcon 9’s first stage returned to land at Landing Zone-1 at CCSFS approximately eight and a half minutes after launch.

The weather forecast from the 45th Weather Squadron showed a 90% chance of acceptable weather on Tuesday, dropping slightly to 80% on Wednesday at the same time of day should the launch have been delayed.

This was the sixth dedicated rideshare mission organized by SpaceX and carried 114 payloads into orbit — some of which will be deployed later from a number of space tugs that are on the mission. The payloads range in size from picosatellites of less than a kilogram — measuring only a few centimeters on each side — to microsatellites massing around 100 kg.

The Transporter missions are intended to provide a consistent cadence of rideshare opportunities to popular orbits such as Sun-synchronous orbit (SSO). As with many other satellite missions in 2022, the Transporter-6 launch date slipped from its original October 2022 target, ending up at the beginning of 2023. There are three additional Transporter missions scheduled for 2023, launching in the first, second, and fourth quarters of the year.

The payloads are destined for an SSO of approximately 525 km in altitude and a 97.6-degree inclination. Payload deployments will begin around an hour after launch and last for about half an hour.

The Falcon 9 launch vehicle for this mission featured booster B1060-15, which tied the record for most flights of a Falcon 9 booster at 15. This record was just set in December 2022 as SpaceX continues to increase the longevity of its booster fleet. B1060 previously launched a GPS satellite, geostationary transfer orbit missions for Turksat and Intelsat, the Transporter-2 rideshare, and 10 Starlink missions.

While some Transporter customers deal directly with SpaceX to get a ride for their spacecraft, most of the payloads are handled by launch integrators who buy ports on the payload stack and then assemble multiple customers into that space. The payloads will then either deploy directly from the launch adapter or from a separable deployer or space tug that will release payloads at a later time — possibly after adjusting the orbit.

ISILaunch handled the integration of 47 spacecraft in CubeSat deployers on two of the ports, some of which are being done on behalf of launch service providers Spaceflight and SpaceBD. The company ExoLaunch has a variety of CubeSat and microsatellite customers deploying from multiple ports on the payload stack. Maverick Space will also be integrating some United States government payloads onboard. Geometric Energy Corporation had planned to launch several payloads on the Maverick port, but those have since been delayed to a later flight.

Italian firm D-Orbit is flying two of their ION tugs on this mission. ION SCV-007 (Glorious Gratia) and ION SCV-008 (Fierce Franciscus) will carry a variety of spacecraft and hosted payloads for customers. Spacecraft are onboard from from Astrocast,  AAC Clyde Space, NPC Spacemind, SAASST, and Tel Aviv University. Hosted payloads include a SWIR camera for returning customer IAC, a propulsion system for Genergo, and prototype satellite hardware for Cryptosat.

Momentus is launching its second test flight of a space tug with Vigoride-5. After experiencing several problems with its previous flight, Momentus will test an upgraded design while deploying a spacecraft for Qosmosys and hosting a payload for the California Institute of Technology (Caltech). Caltech’s Space Solar Power Demonstration One (SSPD-1) payload will test several technologies related to solar power generation and deployment mechanisms.

Orbiter SN1 is going to space next month on a SpaceX Falcon 9 rocket (Transporter-6). Here’s how we mated it to the vehicle at the payload processing facility in Cape Canaveral, FL. pic.twitter.com/ZjiGToOAqN

Launcher Inc. has its first Orbiter space tug on board. Launcher is also working on its own launch vehicle, meaning that it will eventually be able to provide a complete end-to-end space transportation service. The Orbiter tug features a propulsion system using ethane and nitrous oxide as propellants. Orbiter SN1 carries a variety of customer spacecraft and hosted payloads. Spacecraft are to be deployed for customers Alba Orbital, Innova Space, NPC Spacemind, Bronco Space, and Stanford Student Space Initiative. Payloads are being hosted for Logitech Mevo, TRL11, and Beyond Burials.

Many of the payloads on this launch are intended for Earth Observation (EO) missions, whether they use optical imaging, Synthetic Aperture Radar (SAR) imaging, or listen for radio frequency transmissions to perform signals intelligence duties.

Satellogic is expanding its constellation to 30 spacecraft with four more high-resolution satellites onboard Transporter-6: Newsat 32 (Albania 1), Newsat 33 (Albania 2), Newsat 34, and Newsat 35. The government of Albania will have priority access to the Albania 1 & 2 satellites.

Open Cosmos is launching Menut, a 6U imaging satellite with a 5 m resolution that will prioritize taking imagery of the Catalonia region of Spain. Poland’s Scanway Space will have STAR VIBE, a 6U satellite testing an Earth observation telescope as well as a satellite self-inspection imager on a small boom. Alba Orbital will have two of their Unicorn 3P PocketQubes with prototype Earth observation payloads.

EOS Data Analytics — founded by Max Polyakov — has EOS Agrisat-1, the first satellite in their Earth imaging constellation focused on agricultural uses. The 100 kg-class satellite was built in South Africa by Dragonfly Aerospace and provides both panchromatic imaging at 1.4 m resolution and multispectral imaging at 2.8 m resolution.

As we get closer to the launch, see our high-resolution radar image of SLC-40 at Cape Canaveral Space Force Station, FL.

The @SpaceX Transporter-6 mission is expected to be launched from here on Tuesday at 14:56 UTC, delivering 3 ICEYE #SAR satellites into orbit! pic.twitter.com/FrlQLxqLgN

For signals intelligence, Kleos Space of Luxembourg has its fourth cluster of satellites, the Observer mission, consisting of four 6U CubeSats (KSF3A-D) that will fly in formation. Unseenlabs of France has their Bro-8 satellite, also 6U in size. Birkeland and Huygens are a pair of 6U satellites owned by the Norwegian and Dutch ministries of defense that will fly in formation to detect radar emissions from ships.

There are a number of different satellites to perform various communications tasks, including service to cell phones, aircraft, and ships.

Australian firm Skykraft has their Block 2 test satellites on board. This 260 kg system includes the Skykraft-1 tug that separates from the launch vehicle and deploys four more Skykraft satellites. The Skykraft satellites are designed to provide air traffic control services in VHF frequencies, along with aircraft tracking using Automatic Dependent Surveillance-Broadcast (ADS-B) transmissions. The use of satellites for communicating on air traffic control frequencies will require regulatory updates, but Skykraft will be able to begin testing the service in collaboration with Airservices Australia. Skykraft hopes to eliminate gaps in air traffic control coverage and enhance safety by combining the ability to both track and communicate with aircraft from the same platform. 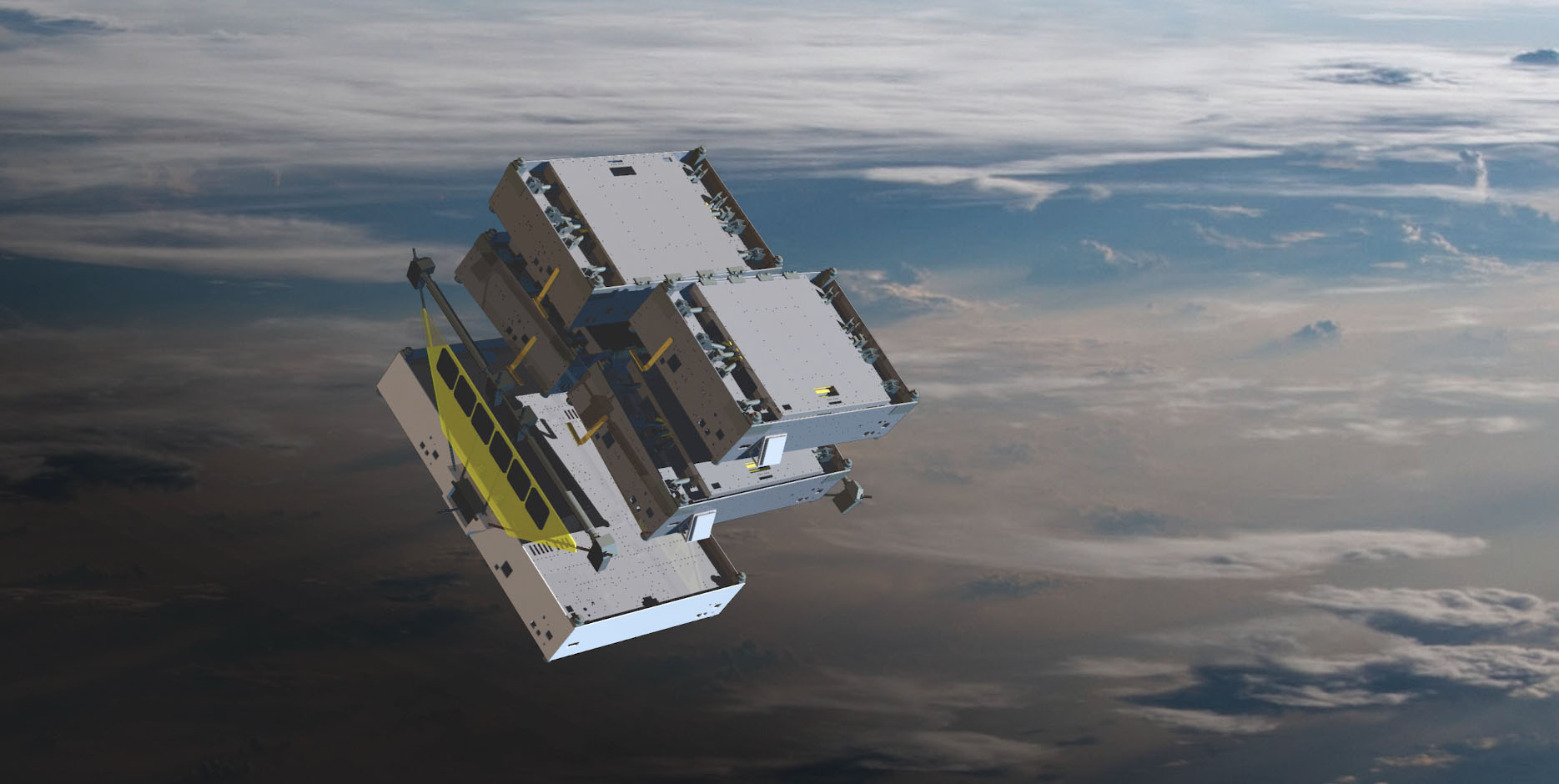 Israeli firm NSLComm is launching NSLSat-2, a 6U satellite with a deployable antenna to allow increased data rates in Ka-band. AAC Clyde Space has its first Kelpie, a 3U satellite that will collect AIS data for customer ORBCOMM.

Communication with Internet of Things (IoT) devices has been a popular target for satellite companies. SpaceX’s Swarm subsidiary will launch 12 more of their .25U CubeSats. Plan-S from Turkey will have their ConnectaT1.2 — a 3U test satellite — onboard. Swiss firm Astrocast has four more of its 3U IoT satellites. Argentina’s Innova Space has a pair of .5U MDQSAT-1A satellites for IoT.

Some of the satellites themselves feature a variety of payloads. Spire Global has a total of six satellites onboard. Three of those will replenish Spire’s constellation of 3U LEMURs with AIS, ADS-B, and RO payloads. Two of the satellites will have a next-generation ADS-B payload, AIS payload, IoT payload for customer Myriota, and will be the first of Spire’s satellites to have their own propulsion. The sixth satellite hosts a polarimetric radio occultation (PRO) payload to collect precipitation data.

Loft Orbital will be launching their YAM-5 mission hosting a variety of customer payloads on an 87 kg microsatellite, including a longwave infrared camera, sensing payload, and S-band IoT payload. Endurosat’s Platform-2, a 6U CubeSat, will carry a number of demonstration payloads including propulsions systems from Magdrive and Hypernova.

Other spacecraft on the mission will perform a wide variety of tasks. Orion Space has Rapid Revisit Optical Cloud Imager (RROCI), a 12U satellite that will demonstrate the collection of weather data for the United States Space Force. Alpha from French firm Gama will test the deployment of a solar sail from a 6U CubeSat.

Kuwait will have its first satellite, the KuwaitSat-1 2U CubeSat. Czech firm BD Sensors has the BDSat-2 1U CubeSat that has payloads for amateur radio operators and will test CubeSat components. Indian firm Digantara will have the Pushan Alpha Cubesat to serve as a space weather testbed.

Sony has its Star Sphere-1, a 6U imaging satellite that can take still images and 4k video with a Sony full-frame sensor, intended to be made available for a wide range of uses including artistic and educational purposes.

NPC Spacemind has the Futura-1 and Futura-3 satellites, 3U and 6U respectively, to test hardware including a drag sail, and will also launch from NPC Spacemind’s own CubeSat deployer hardware onboard ION SCV-008. Stanford Student Space Initiative has Sapling Sempervirens, a 1U satellite testing autonomous cloud filtering and smart downlinking using Google Coral hardware.

Sharja-Sat-1, a 3U+ CubeSat from Sharjah Academy for Astronomy, Space Sciences and Technology in Israel, has an X-Ray detector and a camera system. TAUSAT2 is a 2U satellite from Tel Aviv University with Light Emitting Diodes (LEDs) for an experiment with optical tracking of objects in space.

Details of some payloads were not announced at the time of launch. It is not known if EPIC Aerospace has payloads on board, or which tug is holding Pushan Alpha. This article will be updated as additional payload details become available.

The next SpaceX launch is expected to carry a batch of satellites for OneWeb from the same launch pad on Jan. 8. The busy SpaceX manifest also has two missions for the United States Space Force in January, with one of those using a Falcon Heavy to take a payload to geosynchronous orbit and the other launching a GPS III satellite on Falcon 9. SpaceX aims to launch at least 100 missions in 2023.

(Lead photo: Falcon 9 B1060-15 returning to Cape Canaveral for a Return To Launch Site landing after launching the Transporter-6 mission on Jan. 3, 2023. Credit: Stephen Marr for NSF)