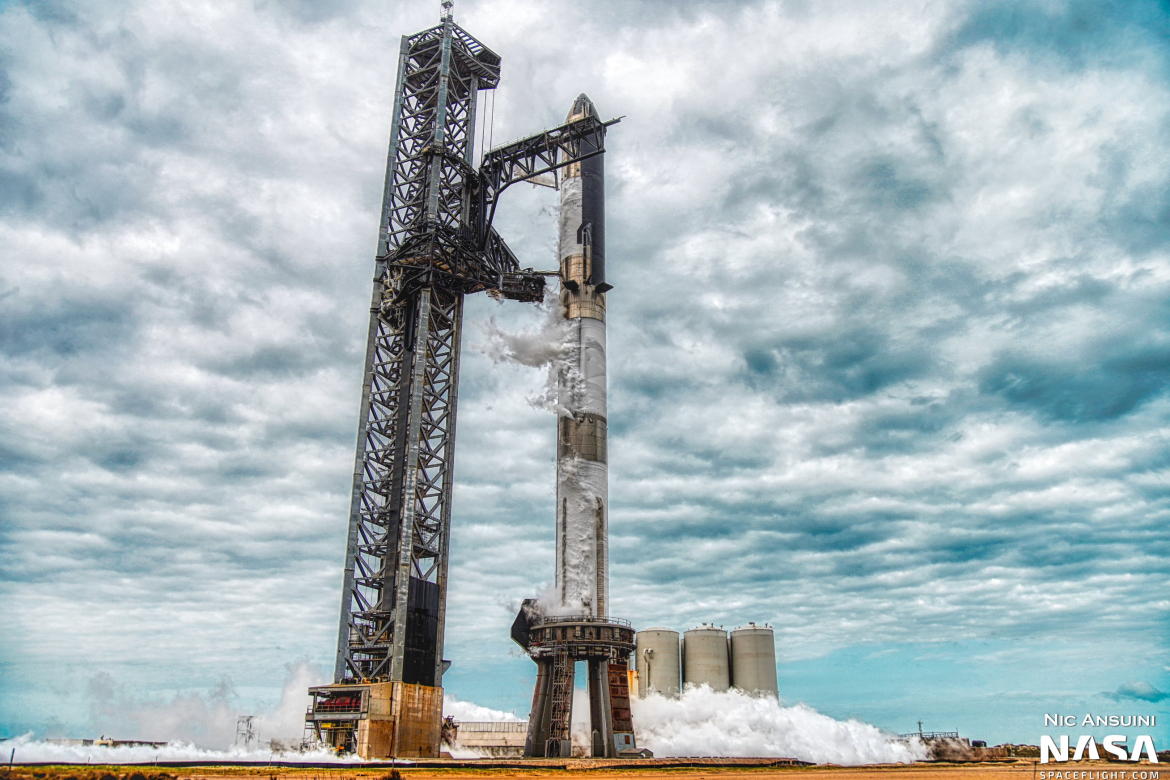 The Starship test program has hit the ground running in 2023, with the full-stack partnership of Booster 7 and Ship 24 entering a pre-launch test flow at Starbase.

With Elon Musk confirming the possibility of launching the world’s largest and most powerful rocket in a matter of weeks, several key milestones are being worked on to ready the vehicle for space. On Monday, Starship was fully loaded during the Wet Dress Rehearsal (WDR) that appeared to go to plan.

Hot on the heels of the maiden launch of SLS, which took the crown as the most powerful currently-operational rocket, Starship is making solid progress toward its debut flight – at which point the SpaceX rocket will become the most powerful rocket to have launched.

Although a significant percentage of the space community sees the two vehicles as rivals, both will be working together for the Artemis program, partnering on the long-awaited return of humans to the surface of the Moon under NASA’s Human Landing System (HLS) contract.

That high-profile NASA contract may have slightly tempered the gung-ho nature of testing at Starbase, as seen with the high-altitude test flights that concluded over a year ago.

Since then, the goal has been focused on launching Starship to orbit, or at least to orbital velocity, which was always going to require the power of the Super Heavy booster.

The latest full-stack tests saw two partial cryo tests, likely aimed at validating ground support equipment that now caters to both the Booster and Ship at two quick disconnect (QD) propellant loading points, with the Booster’s QD located on the Orbital Launch Mount and the Ship’s situated up the launch tower on the QD Arm.

This set the stage for a new milestone, the Wet Dress Rehearsal (WDR), which, as the name suggests, follows a similar path to launch day – minus the ignition of the 33 Raptor 2 engines on the Booster.

can we just light this candle? 🙃😆

This test involved total propellant loading of the Booster and Ship, and will also provide a launch day rehearsal for controllers.

With an evacuation of Boca Chica Village – and the workforce being kept away from the production site down Highway 4 – an obvious sign SpaceX would attempt the WDR was provided.

During the following hours, the tank farm prepared to start loading, before fast fill was called marking the start of the test.

By around 4:30 pm local time, the vehicle started to detank, without any apparent issues, likely marking a successful test.

This was a first-time test for the full stack, and if, for some reason, the test objectives aren’t completed, it could take several days until they try again due to the replenishment needs of the tank farm.

However, all appeared to go to plan, with the vehicle now set to be destacked for the most significant milestone – second only to launch.

With Ship 24 moved away from Stage Zero – also allowing for final TPS (Thermal Protection System) work to be conducted, notably around the attach points on its nosecone – Booster 7 will likely first undergo a 33-engine Spin Prime test ahead of the big day where all 33 engines fire up together.

While expectations for first-time operations should be set accordingly, if the test goes to plan – along with avoiding any notable damage to Stage Zero – Ship 24 will be restacked atop Booster 7, leaving only the launch license to be worked on ahead of SpaceX being able to set the launch date.

How much work remains to acquire that FAA green light is unknown. Such authorization has seen varied timelines during the high-altitude testing of the Ships. For the full-stack launch, additional accommodations from local officials will be needed to ensure the public remains safe in the event of an anomaly.

According to public plans, Booster 7 is set to splashdown in the Gulf of Mexico, with Ship 24 conducting a water landing near Hawaii.

A full mission success would likely gain data on the accuracy of the Booster’s landing ahead of future returns to the launch site to be caught by the launch tower’s Mechazilla chopsticks. At the same time, the survival of Ship 24 until splashdown would validate its TPS. 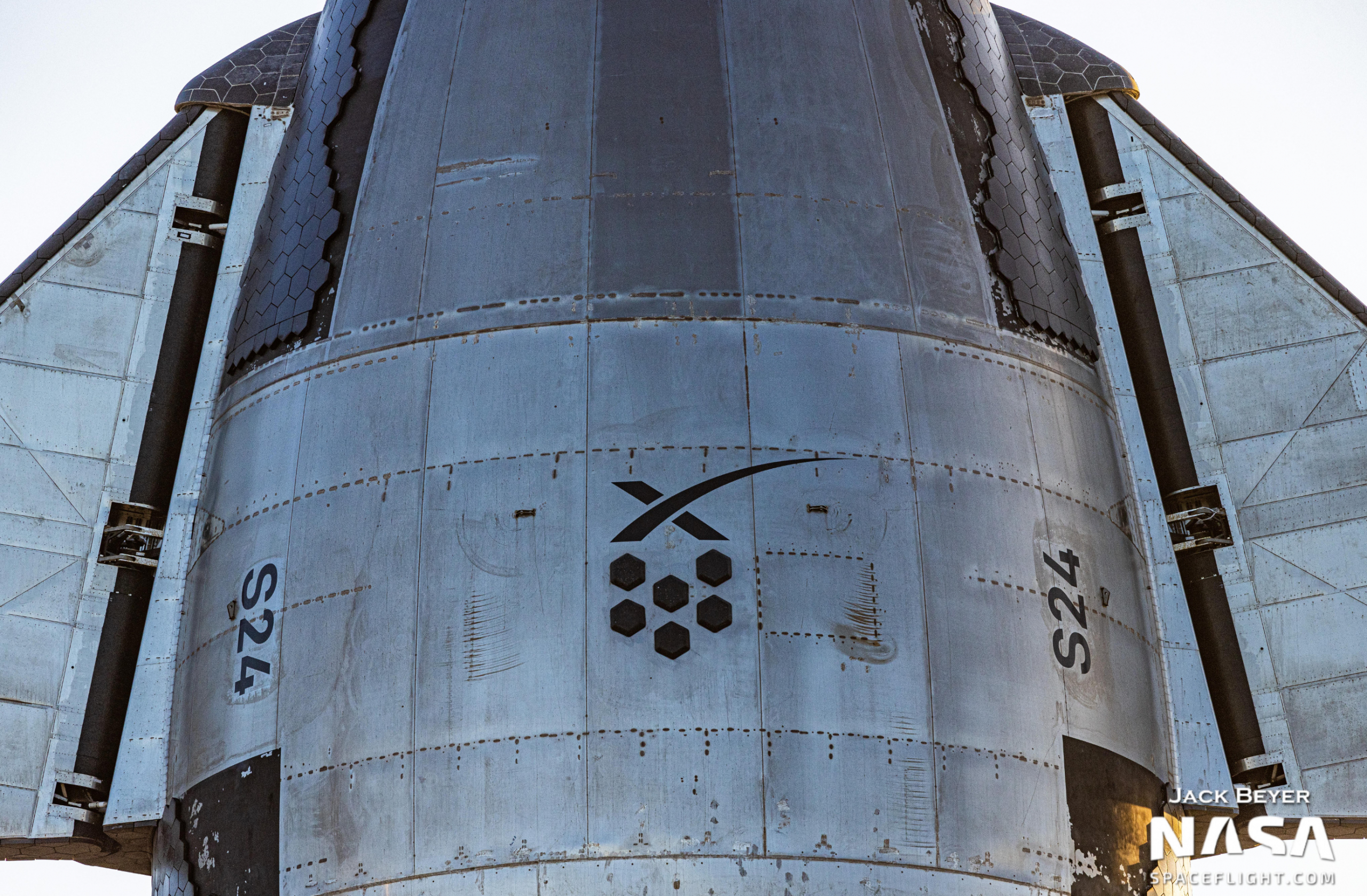 However, given the challenges of this maiden flight, anything past a smooth ascent – as opposed to damaging the launch site via an early failure during the countdown or launch – would be a significant achievement.

Also, in the typical Starbase style, the next full-stack is already moving through its pre-launch test objectives.

Booster 9, which already sports upgrades over Booster 7, has been to the launch site for proof testing and is now back in the Megabay to receive its engines. 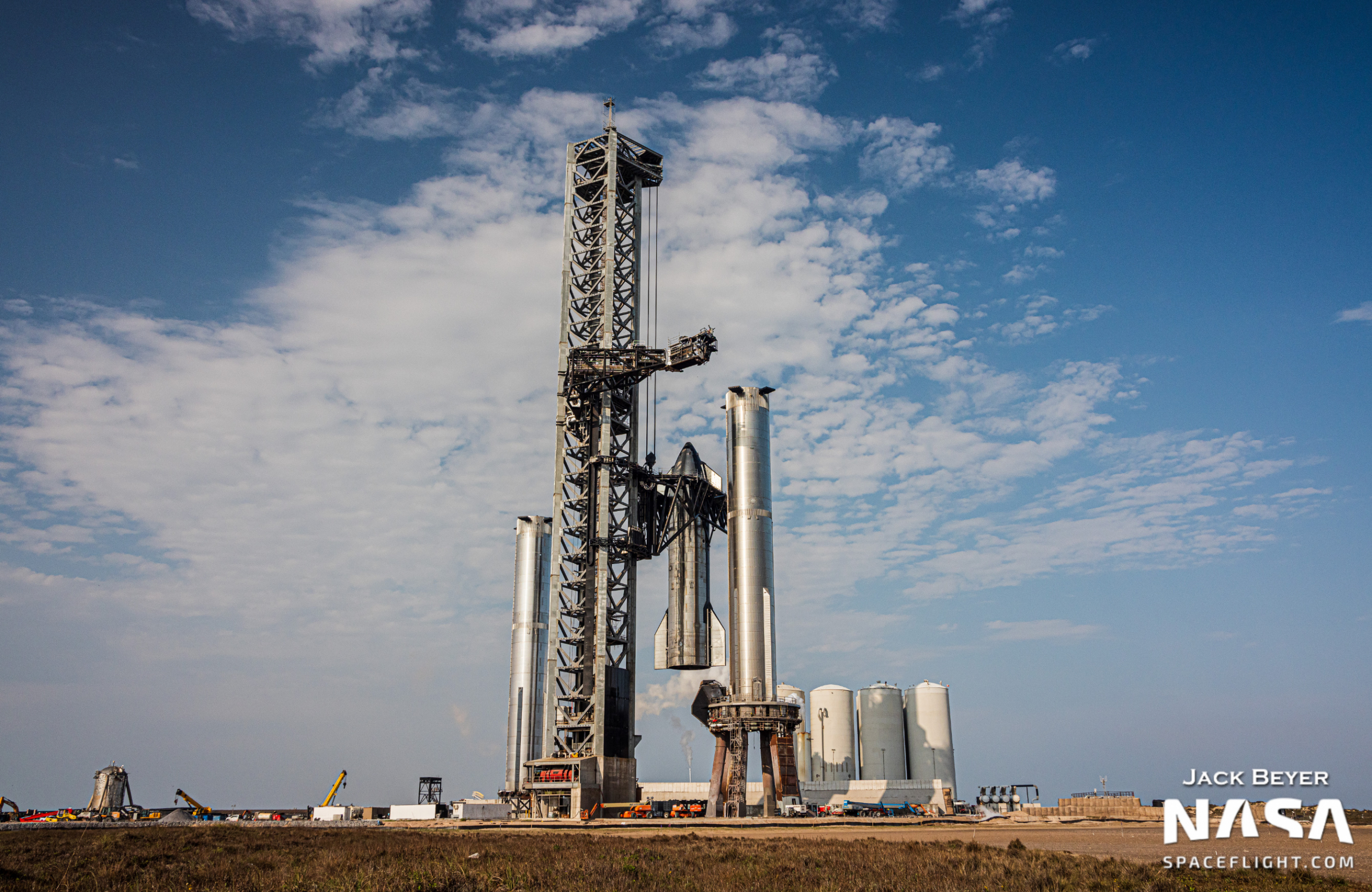 Its current partner, Ship 25, has already been proof tested and has since returned to Pad B at the suborbital launch site with its six Raptors ahead of a Static Fire test campaign that is set to be concluded ahead of Booster 7/Ship 24’s launch.

Elon Musk may have been uncharacteristically modest in suggesting Starbase will produce five full stacks this year, given Booster 10 is already being worked on – with its methane tank currently residing inside the Mid Bay, along with Ship 26 housed inside the High Bay.

As seen on the recent flyover, a variety of sections for future vehicles up to the Ship 30 range are also being staged at the Production Site, leading to an untold number of vehicles in various stages of preparation inside the build tents, with a gaggle of nosecones spotted inside one such tent.

As previously confirmed by Elon Musk, the initial Starships for the East Coast are being built at Starbase ahead of a barge trip to the Cape.

Most of the future launch cadence will occur out of Florida, not least with the prospect of SpaceX’s evaluations into utilizing LC-49. 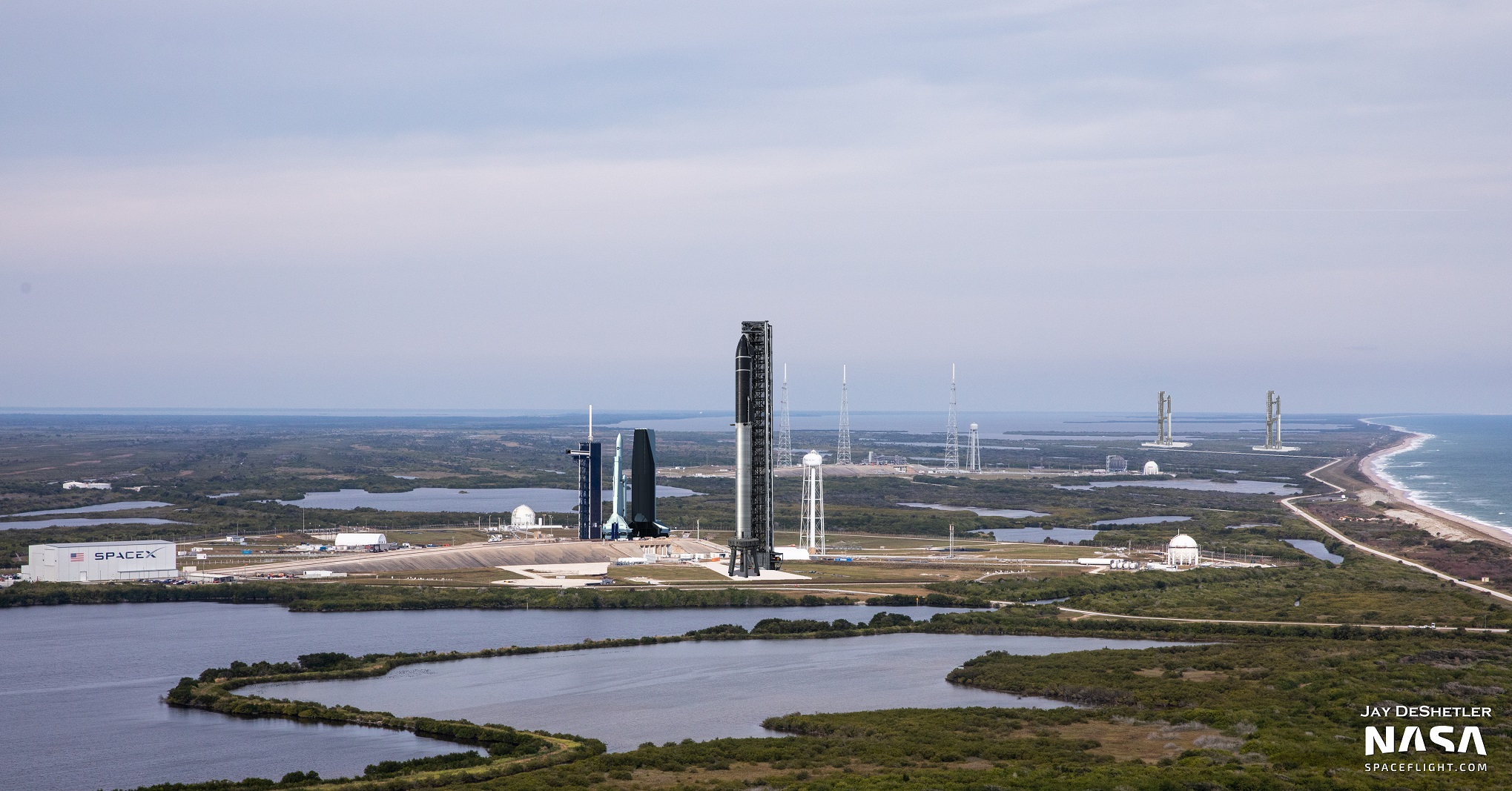 Envisioning of LC-49 from 39A via Jay DeShelter for NSF L2.

The historic 39A is already deep into preparations to host Starship, with the launch tower dominating the complex next to the veteran Fixed Service Structure (FSS) that hosted Apollo and Shuttle missions before being renovated to cater for Falcon 9 and Falcon Heavy launches.

Progress was made over recent days to prepare the Tower for the addition of its Mechazilla system, with the carriage device rolled from Roberts Road to 39A before the pair of chopsticks – slightly shorter versions compared to the ones at Starbase – moved past the Vehicle Assembly Building (VAB) en route to the pad.

Roberts Road will be the KSC version of Starbase’s production site, ready to cater to the East Coast launches, including the flagship NASA HLS missions – bringing a large amount of synergy to 39A, given its role during the Apollo program.

Of course, none of these launches can take place without a large stock of engines, with SpaceX’s test and development center in McGregor tasked with validating the Raptor 2 engine.

Raptor is tested in five test bays at the Texas site. The Tripod Stand provides some of the more visually interesting views of Raptor’s electric TVC (Thrust Vector Control) system being put through its paces, along with several engine restarts.

Over at one of the Horizontal test stand bays, which includes testing for the Raptor Vacuum, an interesting structure has been added downstream of the engine plume.

While it is yet to be confirmed what these additions are being utilized for, it’s speculated that SpaceX is gaining data on how the Raptor engine’s thrust impacts the concrete slab visible in Gary Blair’s flyover photos.

SpaceX has had issues with the Starbase pad concrete suffering damage during Static Fire tests. Gaining data from the numerous long-duration firings at McGregor will provide valuable insight into any modifications they may require at Starbase at future launch sites.

(Lead image: Booster 7 on the OLM as Booster 9 heads back to the Production Site. Credit: Nic Ansuini for NSF)