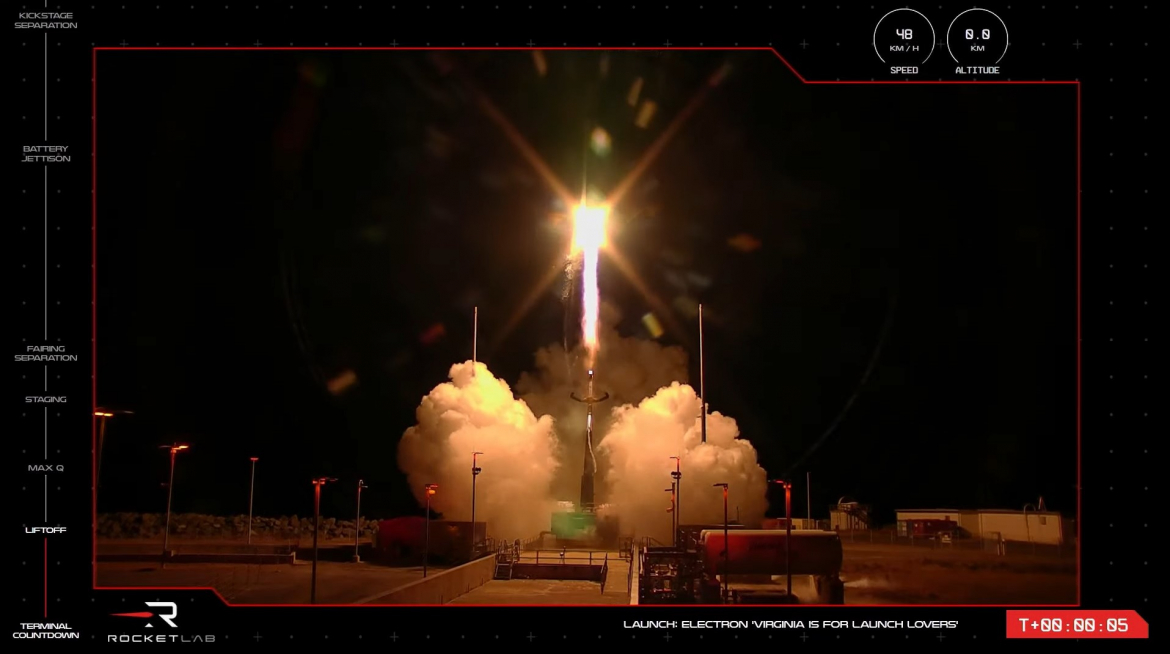 Rocket Lab, which has operated its Electron small-satellite launcher successfully from New Zealand since 2017, as now inaugurated its first US-based launch site. After weather and paperwork-related delays, the mission named “Virginia Is For Launch Lovers” lifted off at the opening of a two-hour window at 6:00 PM EST (23:00 UTC) on Tuesday, Jan. 24.

Upper-level winds prevented multiple attempts in December of last year, and teams had to stand down until 2023 due to holiday travel airspace restrictions. The flight was the first Electron to lift off from Rocket Lab’s Launch Complex-2 (LC-2) at NASA’s Wallops Flight Facility in Virginia.

The Electron rocket, which was not intended to be recovered on this flight, launched three satellites for Virginia-based HawkEye 360 into a 550-kilometer circular orbit inclined 40.5 degrees to the equator. This will allow greater mid-latitude coverage for Hawkeye 360’s existing constellation of RF signal-gathering satellites, which have been launched in clusters of three since its inception.

The HawkEye 360 Cluster 6 satellites to be launched on this flight are designed to provide global commercial radio frequency analytic services to government and private customers as part of a constellation that began launching in December 2018. Beginning with the Cluster 1 launch aboard the Spaceflight SSO-A rideshare mission on a Falcon 9, 12 satellites are currently in orbit.

HawkEye 360’s satellites fly in formation using a specially designed propulsion system. The current Cluster 6 satellites feature eight antennae that collect data from across the electromagnetic spectrum in the UHF, VHF, X-band, L-band, and S-band range; one of the antennae is dedicated to GNSS (global navigation satellite services). Another antenna can pick up GPS interference.

These satellites are approximately 30 by 30 by 45 centimeters in size, and each holds two payloads. Though small, they are capable of gathering signals from 144 MHz to 18 GHz through software-defined radios. The data gathered is processed on the ground using proprietary algorithms.

The Cluster 6 launch brings the number of orbiting satellites in the HawkEye 360 constellation to 15, and allows revisit times of an hour for any specific place anywhere in the world. These services can be used to locate electromagnetic emissions such as GPS jamming signals, electronic signals from vessels engaged in illegal fishing, or activated emergency beacons.

A real-world example of these capabilities is the constellation’s discovery of extensive GPS jamming in Ukraine starting in November 2021 and continuing through the start of the full-scale Russian invasion in February 2022. GPS jamming was discovered near the border of the Russian-held part of Donetsk Oblast as well as the Chernobyl exclusion zone.

Overall, HawkEye 360 is building out a constellation of 60 satellites. The Cluster 6 launch is the first of three contracted with Rocket Lab, after all previous clusters were flown aboard SpaceX Falcon 9 vehicles from California or Florida. 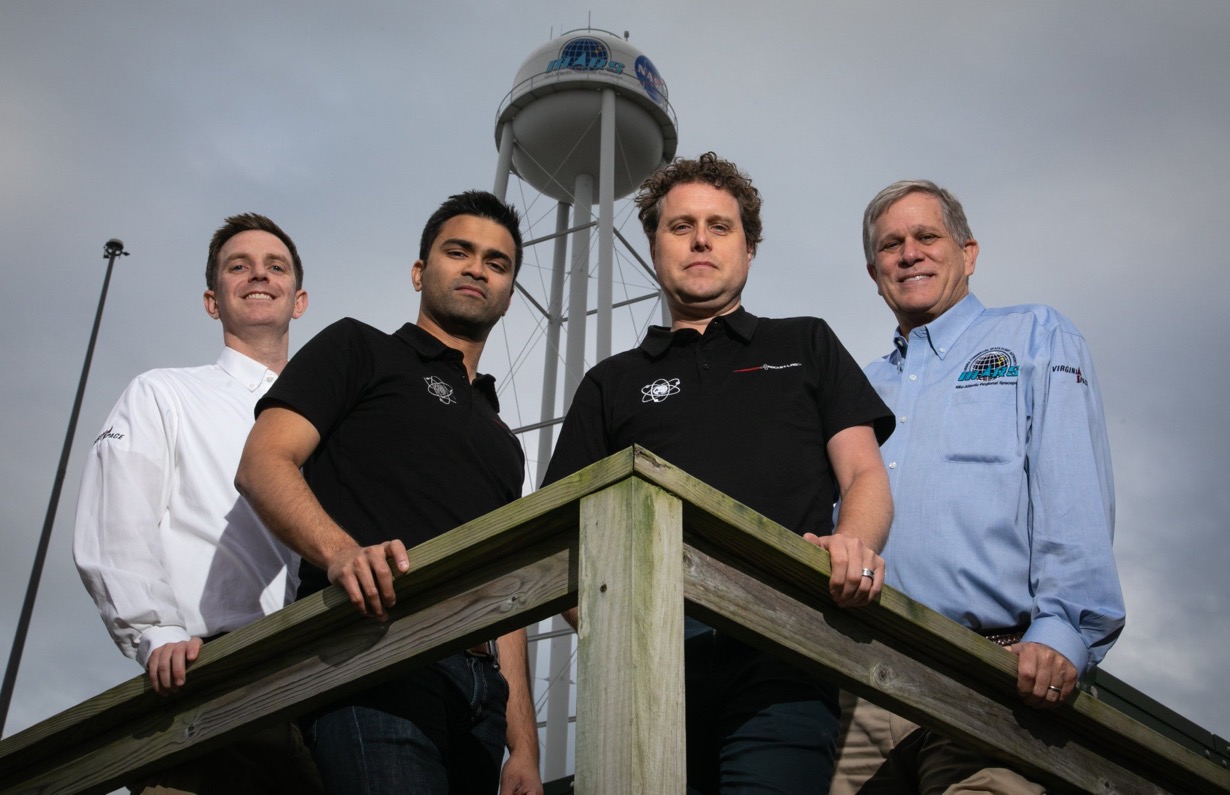 Rocket Lab had planned to establish a launch site in the United States to support launches for different inclinations than the ones available from Mahia in New Zealand. The US launch site would also support US government launches and offer Rocket Lab up to 130 launch opportunities per year from its three pads in two widely separated parts of the world.

The Mid-Atlantic Regional Spaceport on Wallops Island on the Virginia coast was chosen in October 2018, winning out over facilities at Cape Canaveral, Vandenberg, and Kodiak. Wallops’ mid-latitude location, slower pace of existing launch activities, and ability to quickly start work on its launch pad were cited as reasons for the selection.

The LC-2 complex at Wallops started construction in February 2019 and was completed that December before its first launch scheduled for the spring of 2020. The first Electron launch planned from Wallops then was the US Air Force’s STP-27RM mission, with LC-2 supporting up to 12 launches a year.

A rollout of an Electron and a static fire test at LC-2 were accomplished in April 2020, around the time STP-27RM had been scheduled to fly. However, the COVID-19 pandemic slowed down preparations for the flight, and NASA needed to fix errors in the autonomous flight termination software (AFTS). 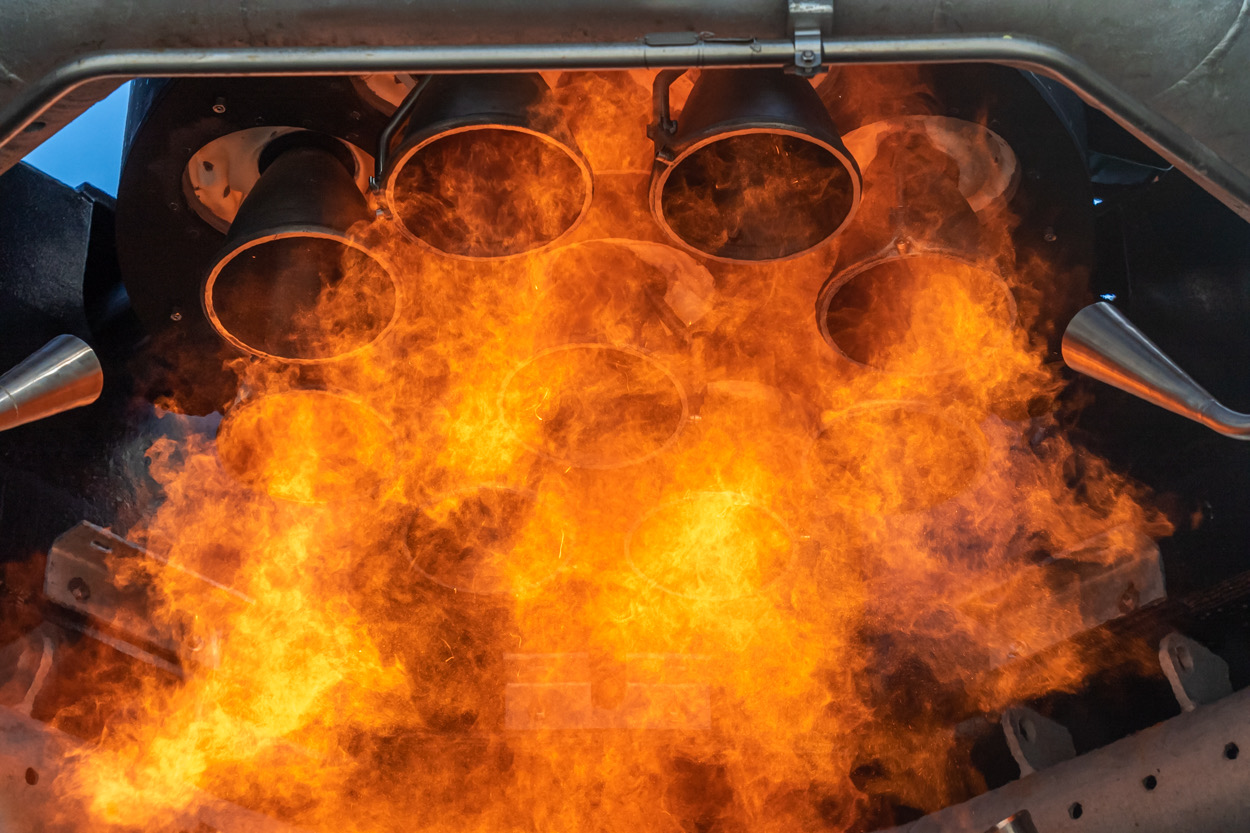 Hot ignition test of the nine Rutherford engines on an Electron at LC-2 in April 2020. (Credit: Trevor Mahlmann/Rocket Lab)

The AFTS issues caused Rocket Lab’s US debut to be pushed into 2021, and later into 2022. In early 2022, the certification of the NASA AFTS software, meant to be used across multiple launch sites and launch vehicles, cleared the way for preparations for Electron’s first launch from US soil.

The STP-27RM flight launched from New Zealand in July 2021, so HawkEye 360’s Cluster 6 launch became the flight that would inaugurate launch operations from LC-2. NASA has two TROPICS launches also scheduled from LC-2 in 2023, following the failure of TROPICS Flight 1 aboard an Astra 3.3 rocket earlier this year.

Rocket Lab has selected Wallops as its launch site for the upcoming Neutron medium-lift, partially reusable launch vehicle and is building a factory for Neutron to go along with the Electron LC-2 launch pad and a combined integration and control facility.

The “Virginia Is For Launch Lovers” flight was the 1st launch for Rocket Lab in 2023 and the 33rd flight for the company overall. It adds a new launch provider to the Mid-Atlantic Regional Spaceport and starts a new era for Rocket Lab.