At 01:09 UTC, or 4:09 A.M. local time in Moscow, a Soyuz 2.1b rocket launched carrying the Tundra 15L early warning satellite for the Russian Ministry of Defense.

The launch occurred from the Plesetsk Cosmodrome in northern Russia. Plesetsk is located in the Arkhangelsk oblast. The Cosmodrome has been in operation since 1957 and is predominately used for Russian military launches.

The last launch from the Plesetsk Cosmodrome was the launch of a Nudol missile on Nov. 14-15. The missile intercepted and destroyed a defunct Soviet Tselina-D ELINT satellite, designated Kosmos 1408, creating space debris and threatening the Expedition 66 crew on the International Space Station (ISS).

Another Soyuz 2.1b launched from the Baikonur Cosmodrome a day prior carrying the Progress M-UM spacecraft with the Prichal module, destined for the ISS.

The payload
The Tundra 15L early warning satellite is also known as EMK (Edinaya Kosmicheskaya Sistema) #5. This satellite joins four other Tundra/EMK satellites currently in orbit around the earth, the first of which was launched in 2015.

These satellites are designed and operated to provide the Russian military with an early warning capability to detect the launches of any potential ballistic missiles towards Russia. In addition, it has been reported that the Tundra/EMK satellites also have secure communication capabilities in the case of a nuclear war.

The four other Tundra/EMK satellites have orbits of around 1626 km by 38552 km. These satellites also orbit the earth with an inclination around 63.37° degrees.

These satellites were contracted to be built for the Russian Ministry of Defense by the RKK Energia and TsNII Kometa. This early warning system is known as Kupol and replaced the previously used Oko-1 system. The Tundra/EMK satellites also replaced both the US-KMO and US-K satellites.

The launch vehicle
This mission marked the 69th launch for the Soyuz 2.1b.

The Soyuz-2 series also eliminated the need for the launch table to be rotated to the proper launch azimuth prior to launch, as the launch vehicles are able to roll to the launch azimuth during ascent. This is an improvement over previous R-7 derivatives, like the Soyuz-FG.

The Soyuz 2.1b is also known as the Soyuz ST-B when launched from the European Space Agency’s Guiana Space Centre, located in Kourou, French Guiana in South America.

The boosters, attached to the first stage, run on an RD-107A engine, which feeds on Liquid oxygen (LOX) and kerosene (RP-1). The engines run in a gas generator cycle. Each of the boosters are known as Blok-B, Blok-G, Blok-V, and Blok-D, respectively.

The first stage, also known as Blok-A, has a single RD-108A engine, which also runs on LOX and RP-1 in the gas generator cycle. Both the RD-107A and RD-108A engines use vernier engines to steer the launch vehicle.

Blok-I, or the second stage, runs on a solo RD-0124 engine that also uses RP-1 and LOX. The RD-0124 operates in the staged combustion cycle. The engine is also used on the second stage of the Soyuz 2.1v. 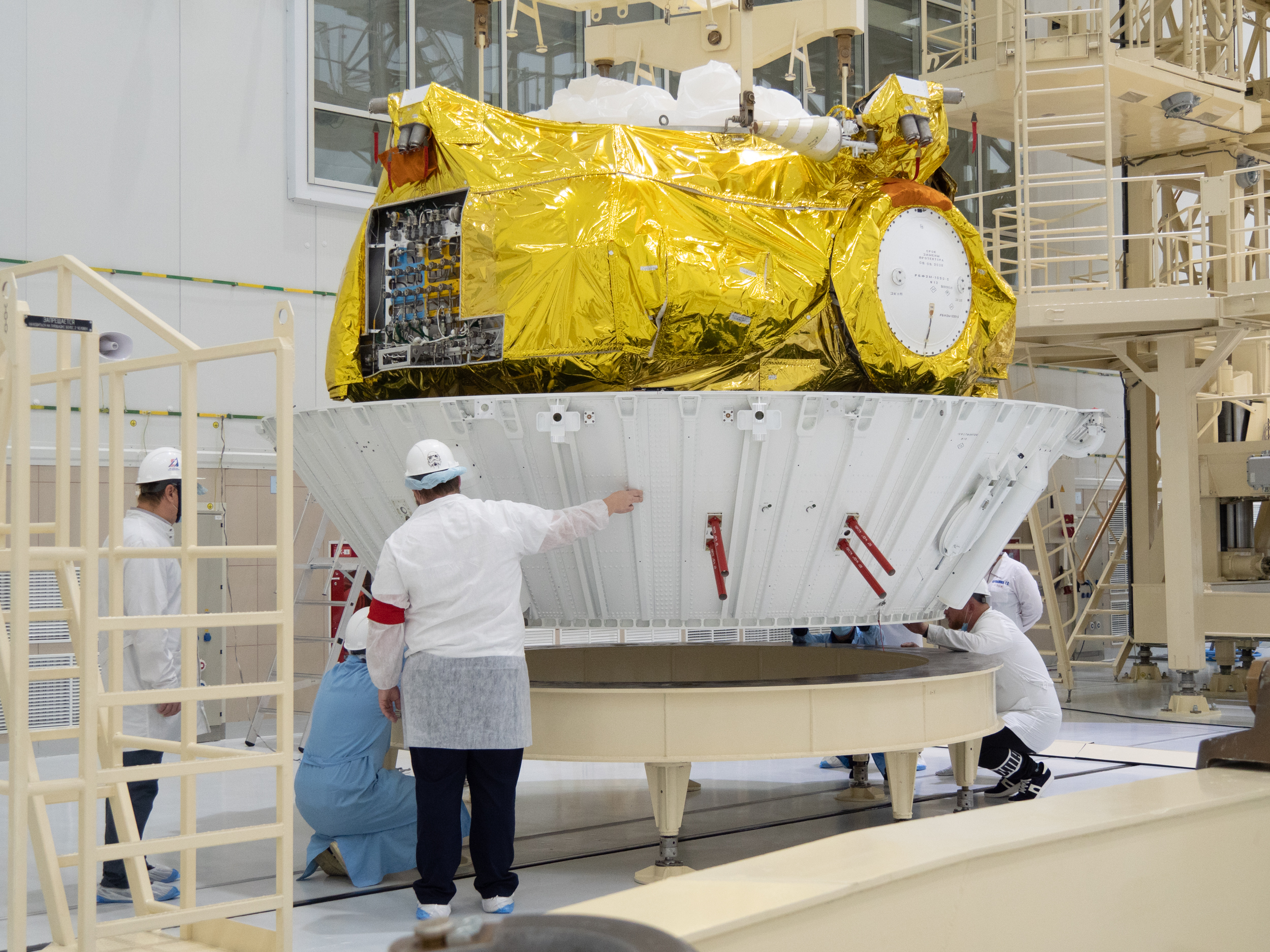 A Fregat upper stage is prepared for final integration for the OneWeb F11 mission at the Vostochny Cosmodrome. Credit: Roscosmos.

For the Tundra 15L/EMK #5 satellite launch, a Fregat upper stage was used. This optional upper stage has a single S5.92 engine which runs on Unsymmetrical dimethylhydrazine (UDMH) and Dinitrogen tetroxide (N2O4), which are toxic hypergolic fuels. The Fregat upper stage is developed by NPO Lavochkin.

The Fregat upper stage has recently been used to launch OneWeb satellites on a Soyuz 2.1b launch vehicle.

Launch
In the days prior to launch, the Soyuz 2.1b was rolled out by rail from the assembly facility to the launch site at Plesetsk. Once at the launch pad, the launch vehicle was raised to the vertical position.

While not confirmed, the launch most likely occurred from Site 43.

Unlike the Soyuz launch sites at the Baikonur Cosmodrome, both the launch pads at Plesetsk and the Vostochny Cosmodromes are painted blue instead of green. 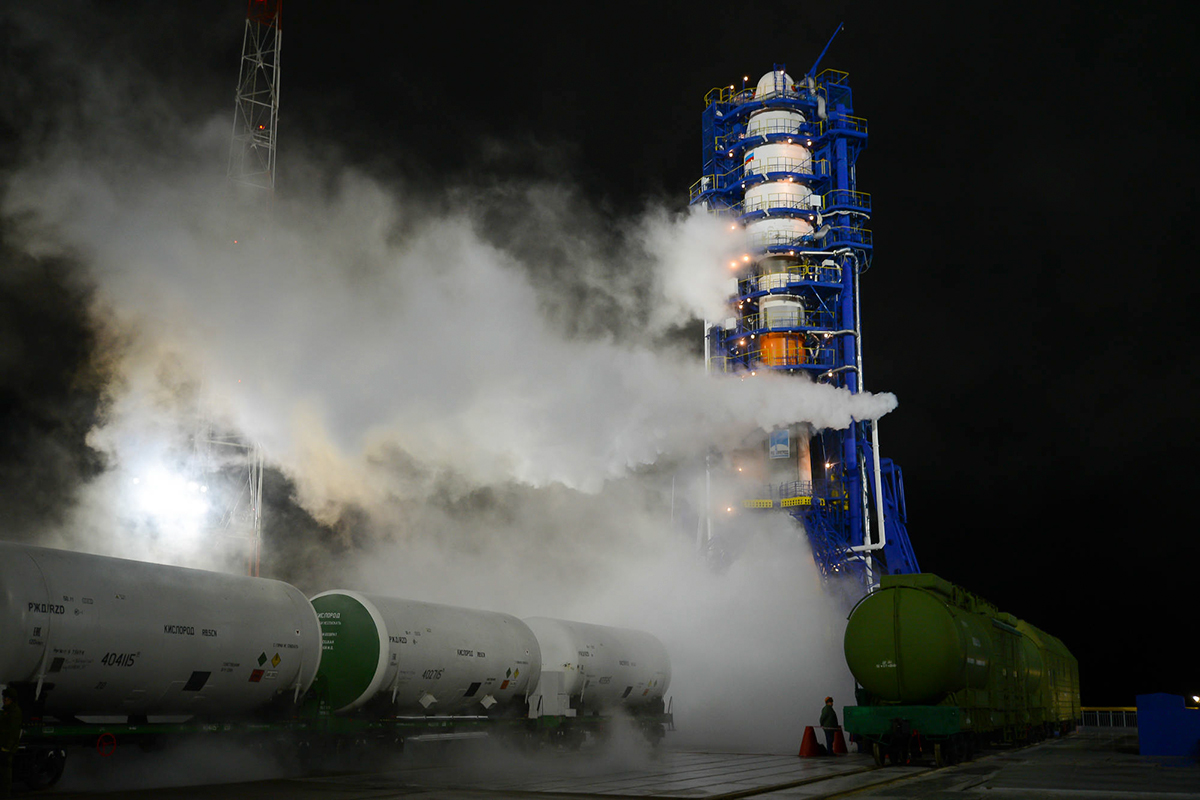 A Soyuz 2.1b rocket prior to launch at Plesetsk in 2018. Credit: Russian Ministry of Defense.

Around five hours prior to launch, the fueling began on the Soyuz 2.1b rocket. This was followed by the retraction of the two service towers from the launch vehicle at around 30 minutes before liftoff.

At 35 seconds before liftoff, the tallest umbilical tower was retracted. This was then followed by the retraction of the smaller umbilical tower at the T-15 second mark. This began the ignition sequence for the four RD-107A engines and the single RD-108A engine.

After spooling up to full power, the RD-107A and RD-108A engines lifted the Soyuz 2.1b launch vehicle from the pad, releasing the four support trusses. The launch vehicle then rolled to the proper launch azimuth and pitched downrange.

After the side boosters were exhausted of fuel, they separated from the Blok-A stage in a formation known as the “Korolev cross.” The Blok-A stage then continued to burn with the single RD-108A engine.

Prior to Blok-A shutdown, the RD-0124 engine on Blok-I ignited while attached to Blok-A, known as hot staging. Blok-A soon separated from Blok-I. The payload fairing, which protects the satellite from the aerodynamic forces in the lower atmosphere, separated.

After the fuel on Blok-I was exhausted, the RD-0124 shut down and released the Fregat upper stage. Then, with the help of the S5.92 engine, the upper stage inserted the satellite into the proper orbit.

As with other Russian military satellites, the Tundra 15L/EMK #5 satellite will receive a Kosmos designation, likely Kosmos 2552.